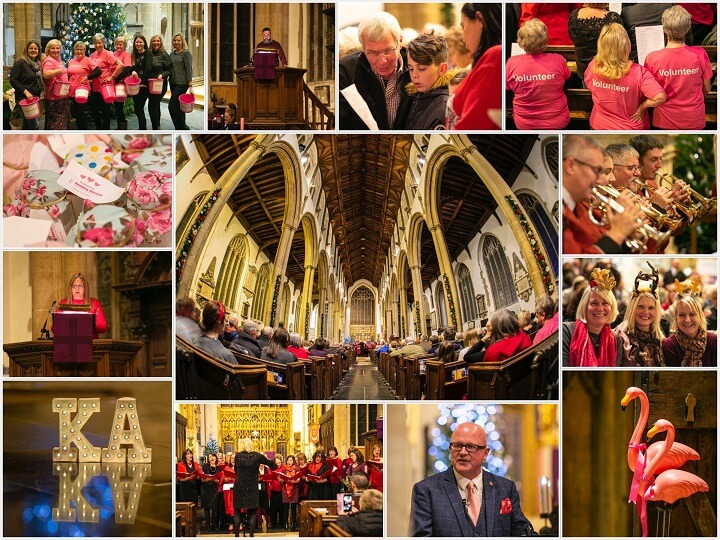 This year’s Keeping Abreast Carol Service was a great success. Several hundred supporters braved a cold winter evening to attend the festive event at the magnificent St Peter Mancroft Church in Norwich on Wednesday 11th December where they were entertained by the wonderful Norwich Citadel Band of The Salvation Army and the fabulous Norfolk & Norwich University Hospital Choir.

The Revd Dr Fiona Haworth welcomed the congregation and in addition to such well-known carols such as Ding Dong Merrily on High, Away in a Manger, Silent Night and The Holly and the Ivy, there were readings by Keeping Abreast Volunteer Tracey Pretty and David Tuthill of Coleman Opticians.

Coleman Opticians are the charity’s corporate sponsor this year and their famous flock of pink flamingos – which have been flying from business to business to raise funds – were spotted around the church and even formed part of the Nativity Scene!

A collection was taken for Keeping Abreast during the penultimate carol and, after a blessing by The Revd Dr Fiona Haworth, the band struck up We Wish You A Merry Christmas and everyone joined in the final song.

This year’s Keeping Abreast Carol Service was also supported by Kinnerton, who donated items for the chocolate stall, the GoodGym Norwich and The Feed, who helped with the mince pies, Auction House East Anglia who sponsored the mulled wine, and CMB Media Group and RockSolid who assisted with the design and printing of the marketing materials.

There was a fantastic festive atmosphere on the night, with mistletoe for sale thanks to the Scott family, delicious shortbread donated by Annie and Quentin D’Arcy, pretty “penny pots” to pick up for collecting loose change and Christmas cards and other merchandise on sale to help with those last-minute Christmas buys.

A huge thanks to Chris Sanham, Head Verger at St Peter Mancroft, and his team who made the evening possible, to the Norwich Citadel Band, the NNUH Choir, Chris Bailey and the readers David Tuthill and Tracey Pretty and to Nigel, our ever-helpful security guard.

This fabulous festive evening went down well with everyone who attended and we’re already planning next year’s event – so please put Wednesday 9th December 2020 in your diaries!

Once again, a big thanks to all of you who came along on the night and wishing you and your families a very Merry Christmas!